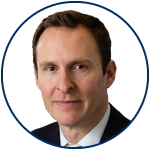 Martin is the Chief Operating Officer of the PURE Group of Insurance Companies, a specialist insurer serving high net worth individuals and families across the United States. Prior to founding PURE in 2006 with Ross Buchmueller and Jeffrey Paraschac, Martin was a member of the team that launched AIG Private Client Group, and served as its Chief Underwriting Officer and Western Zone Executive. Before moving to the United States, Martin began his underwriting career at Hiscox Syndicate at Lloyd’s, and held various positions at Chubb Insurance Company of Europe. Martin has a BS from the University of Wales.