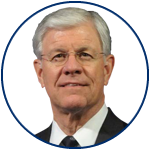 Mr. David Maurstad returned to FEMA as the Assistant Administrator for Federal Insurance. Mr. Maurstad brings over 35 years of experience in the insurance industry. He returns to FEMA after spending seven years in the private sector where he served in executive management positions with an A&E firm and an integrated IT, engineering and management solutions firm.

Prior to his 2004 appointment, Mr. Maurstad served as Director of FEMA’s Region VIII – a position he was appointed to in October of 2001, by President George W. Bush. As regional director, Maurstad coordinated the agency's prevention, preparedness, and disaster response and recovery activities in six states: Colorado, Montana, North and South Dakota, Utah and Wyoming.

In 1998, Mr. Maurstad was elected as Nebraska’s Lieutenant Governor. He also served as State Senator of the Nebraska Unicameral Legislature and was the Mayor of Beatrice, Nebraska.

Maurstad holds a Bachelor of Science degree in business administration and an MBA from the University of Nebraska. His civic activities include serving as President of the Board of Directors of the Beatrice YMCA, University of Nebraska College of Business Administration Alumni Association, Gage County United Way, Beatrice Educational Foundation; and foundation trustee of the Beatrice Public Library, Madonna Rehabilitation Hospital, and Association of State Floodplain Managers. He was a member of the National Academy of Sciences: Water, Science & Technology Board.